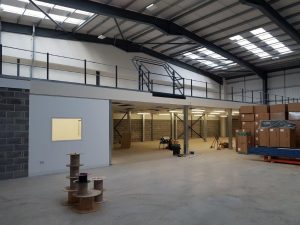 by NP Autoparts are an online retailer of car parts. Based in Bishop’s Waltham they had outgrown their existing premises & found a unit in Chandlers Ford with potential to create additional space by installing a mezzanine floor. This led them to get in contact with Hampshire Mezzanine Floors to seek their advice & recommendations. HMF attended site to carry out a survey to enable them to design a single tier mezzanine floor for storage purposes with possible future expansion prospects for a second tier mezzanine.  A kitchenette & warehouse manager’s office was also included in the design. 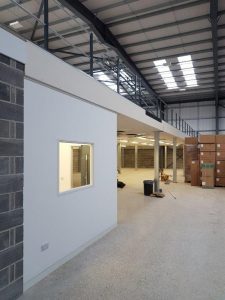 re awarded the project & went on to install a single tier mezzanine floor which provided 365m² of storage space with potential to double this capacity by adding a second tier at a later date.  The mezzanine floor was then fire rated with the addition of 1 hour column casings, 1 hour  fascia & a 1 hour suspended ceiling. Two staircases were fitted for access to the mezzanine floor & also a large up & over safety gate to enable pallets to be lifted up to the storage platform.

Under the mezzanine two rooms were created using partitioning to form a kitchenette for staff & also an office for the warehouse manager  which included a large window allowing him to be view the ground floor  operations. The existing toilet & office area were also refurbished.

The £58K project was completed in 5 weeks as originally planned & enabled NP Autoparts to move from their limited size unit in Bishop’s Waltham to their new unit in Chandlers Ford with an immediate increase in space & the potential for further growth by the addition of a second tier mezzanine floor for either increasing storage capacity or to create extra office space. 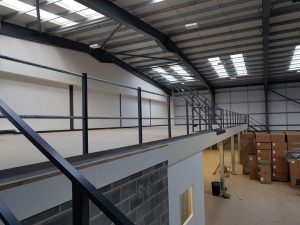